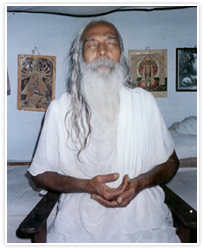 ” As when the mantra sinks in Yogi’s ear,
Its message enters stirring the blind brain
And keeps in the dim ignorant cells its sound;
The hearer understands a form of words
And, musing on the index thought it holds,
He strives to read it with the labouring mind,
But finds bright hints, not the embodied truth:
Then, falling silent in himself to know
He meets the deeper listening of his soul:
The word repeats itself in rhythmic strains:
Thought,vision,feeling,sense,the body’s self
Are seized unutterably and he endures
An ecstasy and an immortal change;
He feels a wideness and become a power,
All Knowledge rushes on him like a sea:
Transmuted by the white spiritual ray
He walks in naked heavens of joy and calm,
Sees the God-face and hears transcendent speech:

Canto III: The call to the quest (220-235) – From the Supramental
Mantric poetry of “Savitri” by Sri Aurobindo

Integral mantras for an integral realisation of the Divine and transformation of nature and body, the following Nama (Name) mantras of the Supreme Divine have been revealed to Sri T.R.Thulasiram in their integral form. Here, the name of Siva or Rama or Krishna stands, not for any overmental god of the Religions, nor exclusively for an Avatar of that name, but for the all-inclusive Supreme Divine, one with the. Divine Shakti too. In the meditative chant of the two-line mantras, as well as the following, the first line gives the upward consciousness, the first part of the second line the inward and its last part the downward, though however, the mantra as a whole gives a powerful cumulative effect of concentration generally in the whole system or at a particular centre like the heart or the mid fore-head or the top head. “…Jai Ram” gives the upward consciousness, “Jai Rama..” the inward, and “Jaya Rama..” the downward; “Sree..” upwards, “Sri” inwards; “Om,”

Sri Thulasiram is whole heartedly thankful with gratitude to Sri Gangadharan for his graceful humility and catholic readiness to accept and do these mantras one by one at his specific request. The above is given here with his knowledge and approval. Some other devotees also had integration of the three bodies at the psychic level, though without the ascent, but resulting in the experience of the concrete and tangible Presence of Swami Ramdoss or Sri Aurobindo or the Mother, deep within the heart, and also in the whole body, according to the chant of integral mantra chosen.

These integral mantras are meant for practice by the people of all age- groups including the youths and the householders and that in any posture, sitting, lying or walking.